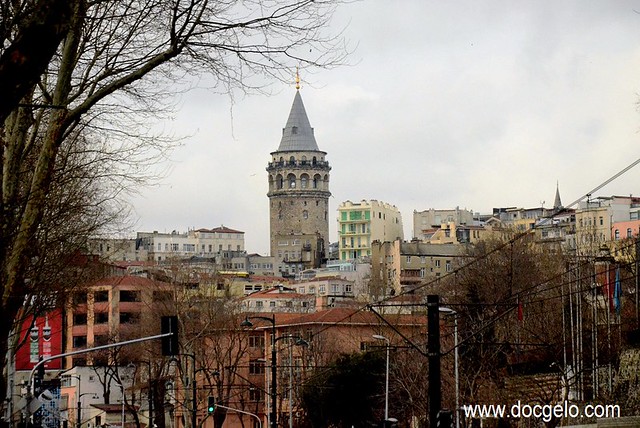 The Galata Tower dominates the Beyoglu skyline, viewed from the streets in Karakoy, Istanbul.

What do you do when you only have limited time, like three days and two nights to spend in one of your dream destinations? Do you ever plan to maximize your stay and enjoy the experience in a city, where even a month-long trip isn’t enough? What measures do you do when inevitable instances occurred, like delayed flights that led to late arrival, and eventually, checking-in at hotel after desired schedule?  Neither I rush, nor I waste time. I just don’t.

I experienced all those actually in my maiden trip to Istanbul from my current homebase in Dubai last February 15 to 18, 2015. More than a month before the trip, I carefully chose my itineraries, figured out which museum or place of interest is closed on what days, researched the admission rates and timings, read about most practical means of transportation, and laid out options if in case plan A or plan B won’t work.  No, I’m not obsessive-compulsive traveler, however, I never go out to war without being armed.

When I arrived in Ataturk International Airport later than expected due to delayed flight, I knew I could only go to one destination near my accommodation -Sub Karakoy Hotel. Without a hint of hesitation, I let go of the idea of touring Istiklal Caddesi and riding its heritage trams, and decided instantly to just savor the city’s view from the panoramic balcony of Galata Tower on my very first day in Turkey. In my mind, what else could be more fitting introduction to Istanbul than that?

Right after a quick and hassle-free check-in, mandatory dropping of my 50-liter-backpack and duffle bag in my room, a short but much-needed ritual in the toilet and shower, a few-minute-change to appropriate winter clothes, I was already on the road to find Christea Turris (or Tower of Christ according to the Genoese), or the Megalos Pyrgos (or the Great Tower according to the Byzantines), or simply Galata Tower or Galata Kulesi in Turkish.

Despite my personal preparation for the trip, I was still caught unprepared. I honestly forgot that other than the fact that Istanbul is rich in history, culture and diversity, beyond the common knowledge that the city has Asian and European parts, this beautiful Turkish city was built on seven hills literally. And so my mortal being was physically challenged for walking uphill on a steeply inclined cobble-stone alleys en route to the iconic tower.

I was panting under seven-degree-Celsius-weather. Deep breathing went even deeper. Pulse rate became full and bounding, my heart beat was rapid. My first exposure to Turkish winter almost numb my joints; but because I was euphoric just the same each time I travel, the almost pathologic cold breeze made me feel so alive! However, at that moment, I was clueless where to go and simply relied on the flow of tourists that thankfully led me to the right path. Nonetheless, I was in blissful state when I found myself standing at the foot of the Galata Tower. Then my ultra-light neurotic mood only came back to reality state when I needed to pay 25 liras for the entrance ticket. 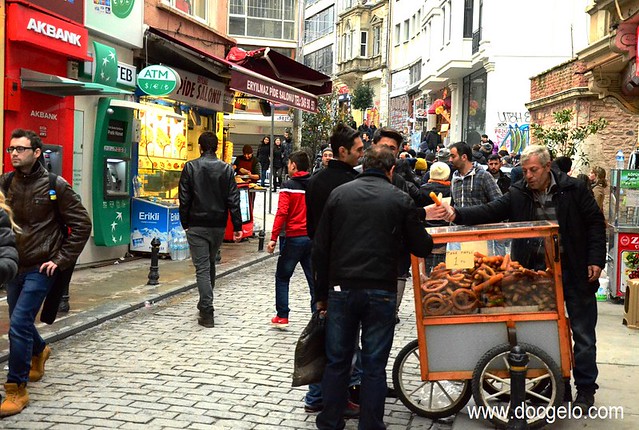 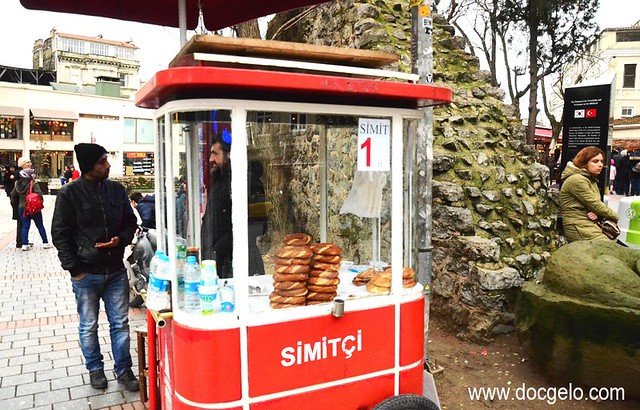 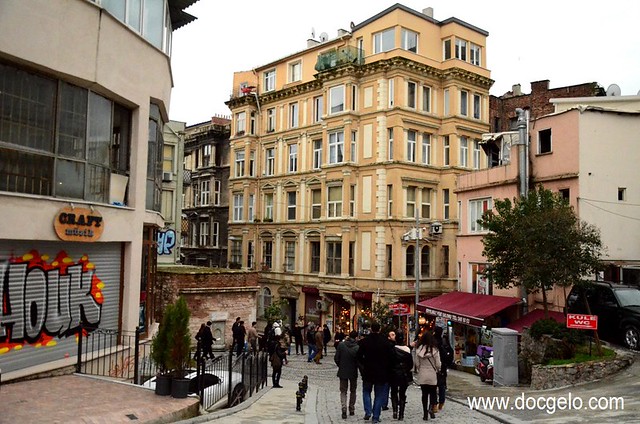 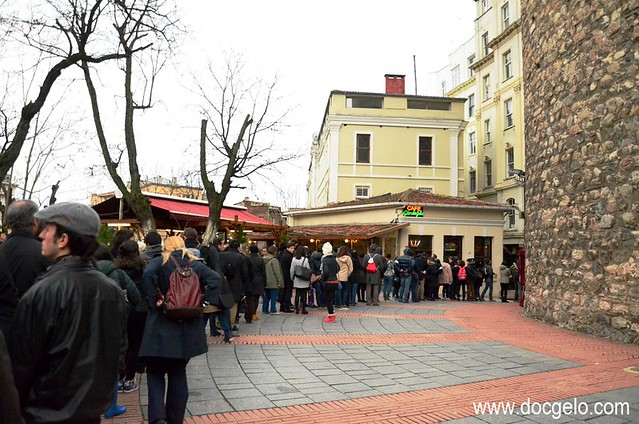 The long queue that winter afternoon. It took me more than half an hour to get a ticket. 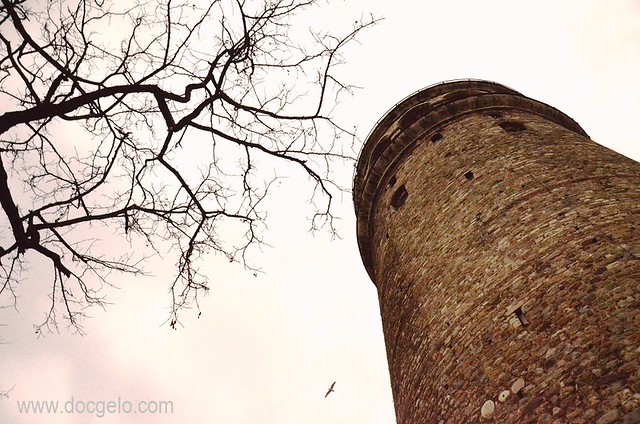 My first near-encounter with Galata Tower.

After a ride on the lift and a few steps on the wooden stairs to reach the Tower’s restaurant, and finally the  balcony, the 360-degree-view of Istanbul was truly breathtaking! Even more stunning before dusk as the city lights gradually glow and became brightly twinkling before dark! 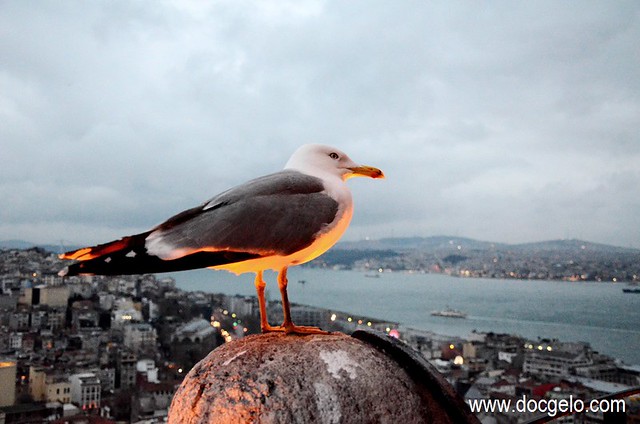 There was a signage that directs tourists to move towards the right, but of course, a few hardheaded went against everyone. Unbelievable! In spite of chaotic traffic, no one stole my attention from the incredible view! I submitted myself to the once-in-a-lifetime-chance and let Istanbul welcomed me at the Galata Tower! I tried to absorbed the moment for several minutes until I realized that the sun is setting down; and I needed to immortalize the poetic view in my humble captures. 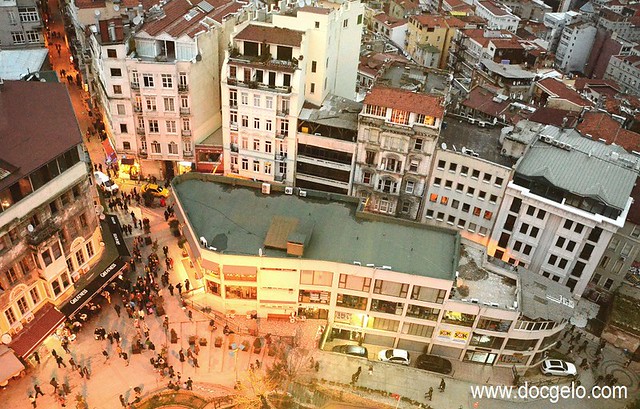 Even the view below was fantastic! Thank God, I didn’t feel nauseated or acrophopic. 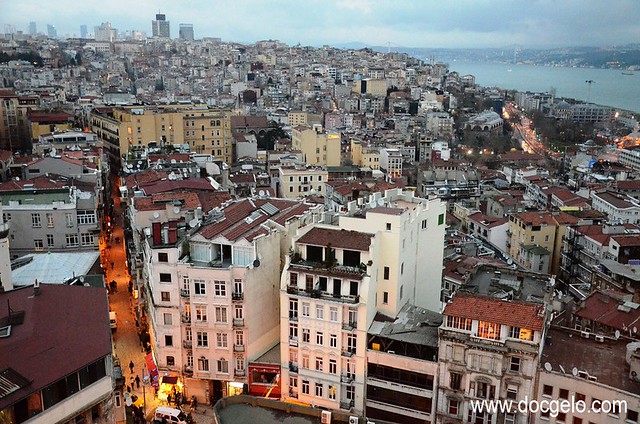 Inspired by a few I found online, I created my own guide of sights of interest located at Sultanahmet – the Old City of Istanbul, as viewed from the Galata Tower. 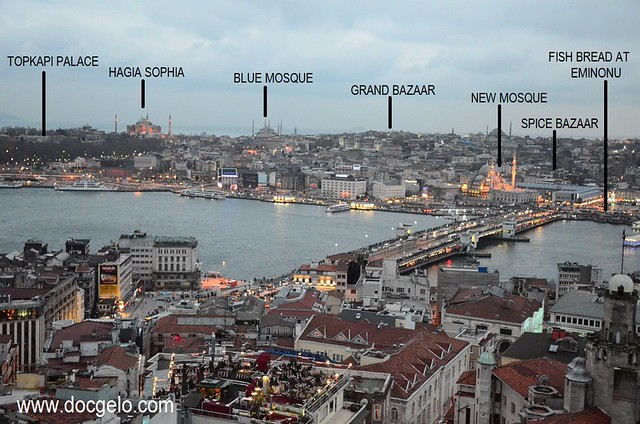 Learning and personal discovery are a priceless gifts when we embrace traveling. I initially thought that the Golden Horn or the urban waterway under the Galata Bridge, bisects Asian and European parts of Istanbul until my Turkish friend, Mehmet whom I met and dined with, explained to me casually that it runs through both European sides of Istanbul, and that the Asian part lies just across where Golden Horn joins the Bosphorus Strait. 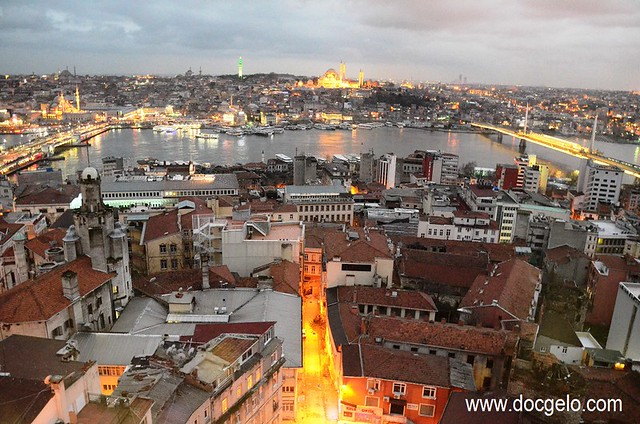 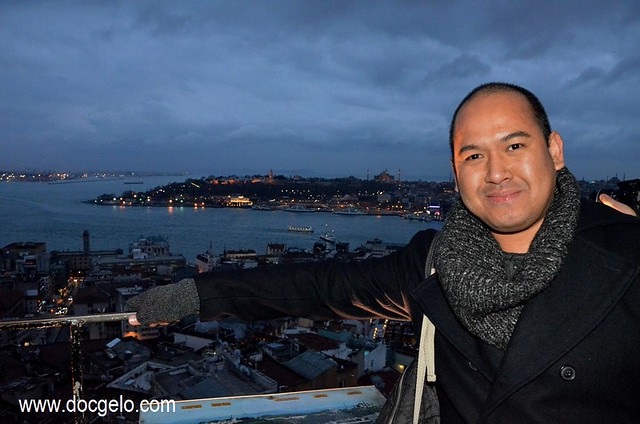 History of Galata Tower as printed on the entrance ticket :

“Galata Tower, one of the oldest and most beautiful towers in Istanbul, was built of wood as lighthouse in 528 by Byzantine Emperor Anastasius Oilosuz. It was rebuilt of stone masonry and called Christea Turris (Christ Tower) by the Genoese in 1348. The tower, captured by the Turks when Istanbul was conquered in 1453 is 66.90 meters high from the ground and 140 meters from the sea level. It has a diameter of 8.95 meters and wall thickness of 3.75 meters.” 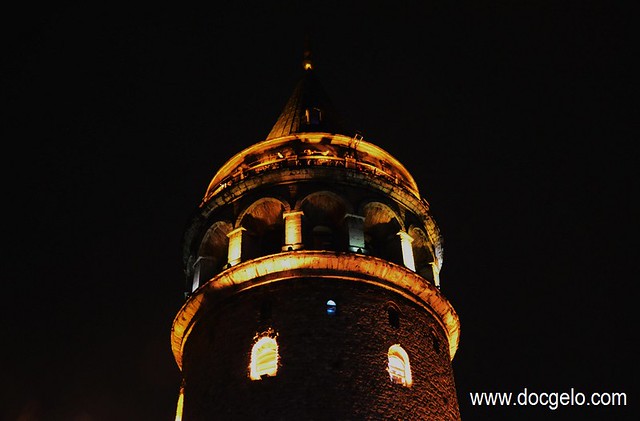 When I descended from the panoramic balcony just before riding down the lift, I took advantage of the touristy booth that transformed me into a regal and dignified Ottoman Sultan for 15 liras. Why not. 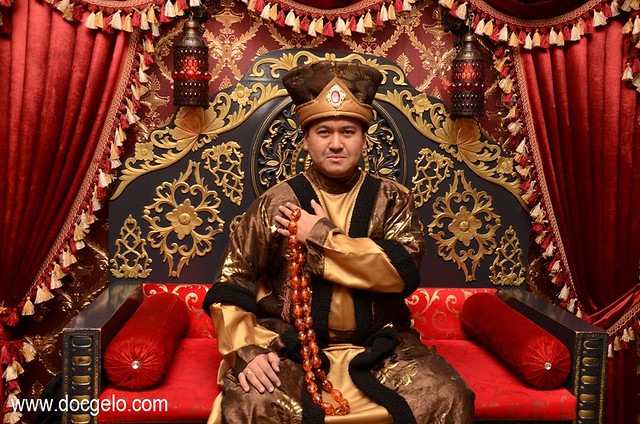 Upon exiting the tower, I did some early little shopping for cheap but quality postcards and meticulously chosen fridge magnet souvenirs, I also scouted for place that serves local food for my dinner. I had Pilavustu Tavuk Doner and a small bottle of Coke for total cost of 7.50 liras only. It was a tasteful Chicken doner that’s quite popular street food in Istanbul. I also ordered from another stall, a cup of orange juice that was squeezed freshly right in front of me for only 1 lira.  How’s that for my first ever Turkish meal?! 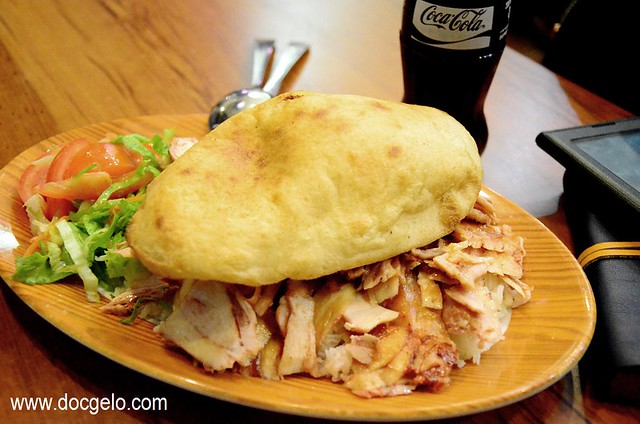 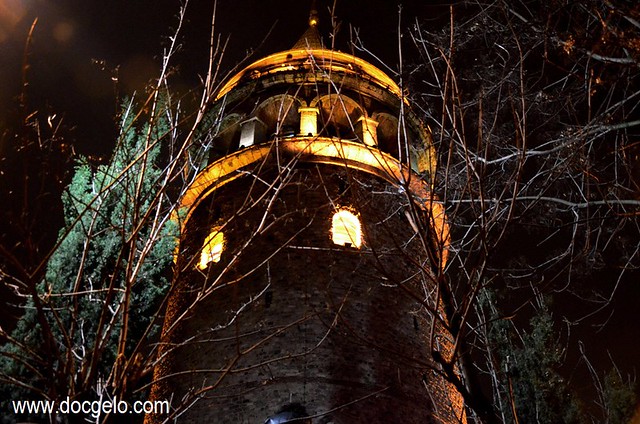