Granting a request of a preschooler son and apparently trying to stretch the moments of family bonding few days before I submerged myself into serious 30-day-medical training in Tokyo, we watched Alice in Wonderland. 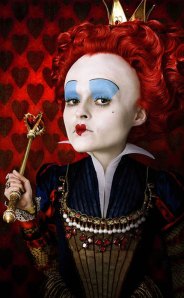 Our experience of seeing this movie wasn’t as spectacular as the other movies we love like UP, Harry Potter Series, Chronicles of Narnia and Pirates of the Caribbean Trilogy to name a few.  My family and I watched it yesterday in Gateway Mall, Araneta Center but casually went home and talked nothing about the movie which I thought was uncommon for us.

Sure, it was visually stunning.  Costumes, make-up, set design and graphics are all fantastic but the entire movie fell a little flat for our taste.  Despite the fancy production and genius imagination of its director, I consider that the only reasons why the movie is worth watching are the humor and amazing presence of  Helena Bonham Carter and Johnny Depp on screen. They were in their best elements! Their characters –the Red Queen and Mad Hatter respectively, stole the entire wonderland movie from Alice.  The other/s  who also caught our attention were Tweedledee and Tweedledum played by Matt Lucas. Being a Tim Burton movie, it’s a little dark – figuratively and literally. The one who played Alice failed to work her charm on us;  or perhaps, it might be just us.

The Big Reveal :  It was the first time we watched a full-length movie on 3D.  (We only saw Avatar on dibididibidi during Gabby’s field trip).  The last time Tina, Gabby and I saw short film on 3D was in HK Disneyland’s Mickey’s Philhar Magic Theater back in New Year of 2007.   The reason why we try to avoid watching movies on 3D is the fact that my wife’s eyes aren’t 20/20; (so are mine). She has vertigo too and easily gets dizzy when triggered so she found those 3D glasses less appealing plus Gabby thought that they’re unusual.  At any rate, I will surely miss watching movies with them soon.

🙂 Have you watched Alice in Wonderland?  How did you find it ?

22 thoughts on “TO WONDERLAND AND BACK”