After a wonderful animal-encounter at Ocean Adventure in Subic, the 5 buses of preschoolers (Gabby & his batchmates) with their parents (including me and Tina of course) and teachers trooped to Clark, Pampanga and had a brief exposure to Filipino history & culture. 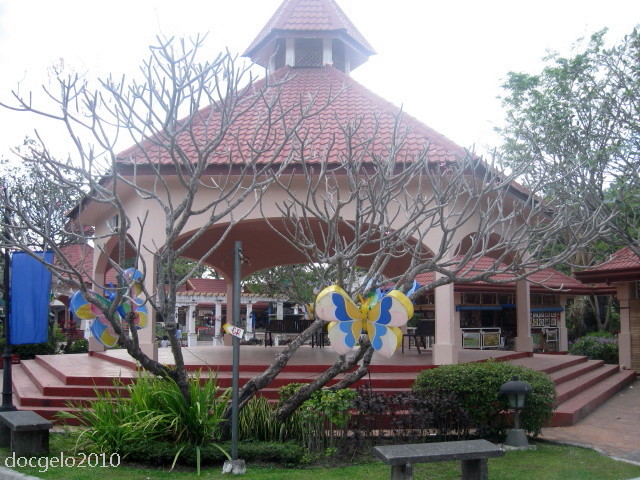 We already heard few years ago that NAYONG PILIPINO which was previously located in Pasay City near the airport, is now in Clark, Pampanga but we only got to see it last week.  This TEMPORARY RELOCATION of the famous replica of most tourist spots of the country was done to give way for the building  of the 2 Ninoy Aquino International and domestic terminals.  And the latest we’ve known from our trip,  plans have transpired to push through with the new construction of Nayong Pilipino near the SM Mall of Asia area.  Have you heard of this news?

First stop : the replica of church in Bulacan imprinted on Philippine Ten Peso-Bill.

MALOLOS CHURCH served as venue for so many Philippine Constitutional Conventions.

Then there’s also those WALLS of  INTRAMUROS and what appeared to look like a river however, there was no running water but a rock bed.

The Nayong Pilipino guide informed us that this Clark’s version is divided into 2 parts : Precolonial and Post Colonial eras.

At the Precolonial area, the simple Pinoy lifestyle before the Spanish regime is depicted. We were greeted by an Ifugao native dance…What a warm welcome for all of us! 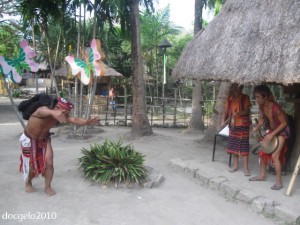 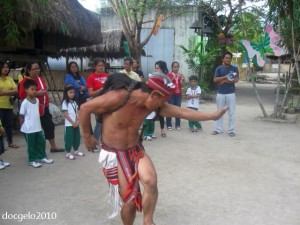 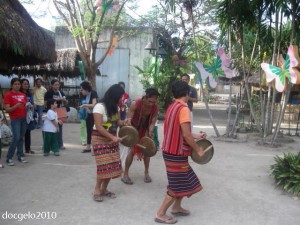 The short performance of the natives was a fresh sight to the kids who were used to gyrating pop music.

The simple and creative way of living of Filipinos long before we were under foreign rules were shown in these huts built without a single nail or screw and amazingly can withstand any typhoon.  I guess these native shelters truly represent what early Pinoys were – imaginative, resilient, simple.  Do we still have these qualities at present ? 🙂 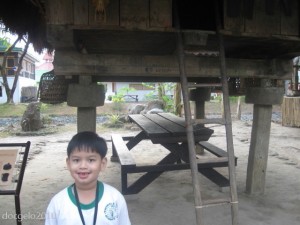 Weaving of textiles with intricate and colorful patterns was also demonstrated. 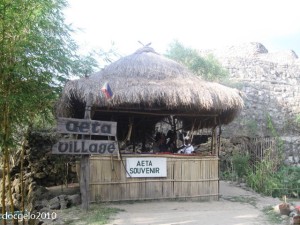 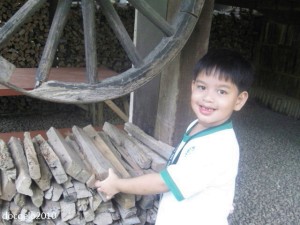 This is a replica of an upscale Muslim house that’s suited for a Sultan or Datu, the village chief in Maranao, Mindanao. It’s called TOROGAN. 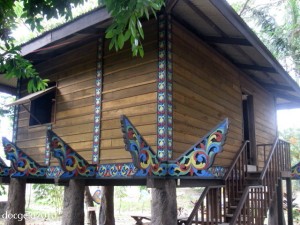 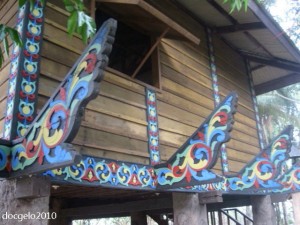 The Torogan House has colorful and intricate butterfly-like end beams that protrude in front of the house; apparently gorgeous Maranao artwork!

On the left is  Ang Alamat ni Malakas at Maganda… And on the right is Lapu-lapu, the chieftain of Mactan, pardon the pun, appeared to us as depressed in his stance… (click photo to enlarge) I believe Lapu-lapu deserves to be depicted victorious having been considered as the country’s first hero.

There are also monuments for Philippine Folklore’s goddesses – the likes of Mariang Sinukuan and Maria Makiling; but I didn’t take photos for I personally didn’t like how they were created. Imagine a statue of a women who look distraught complete with a dress-slit nearly up to their inguinal areas! 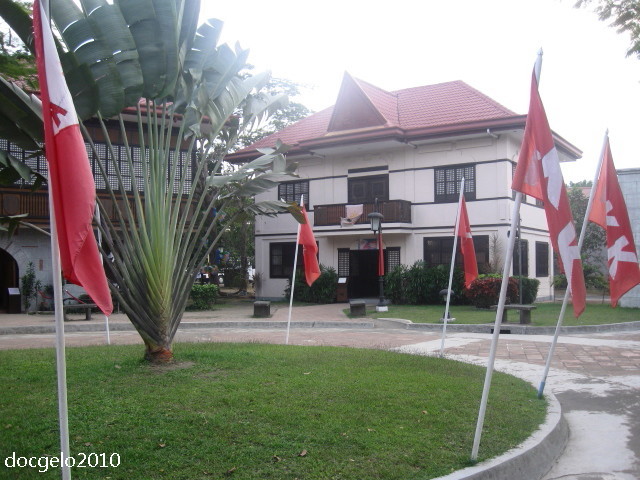 As far as I recall, there are replicas of houses of Filipino heroes – Apolinario Mabini’s, Jose Rizal’s and others’ that played significant role in Philippine History. 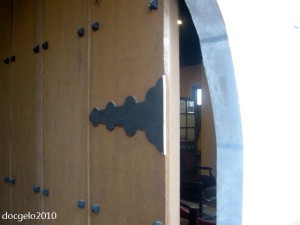 Note the features of houses during post colonialism greatly evolved and was then inspired by Spanish architecture.

As parents, Tina and I are always trying our best to be well-rounded with Gabby. We appreciate joining his field trip for we know that there’s more to life that kids should learn outside the corners of their classrooms and beyond reading their books. 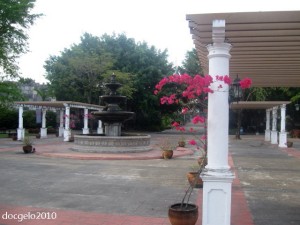 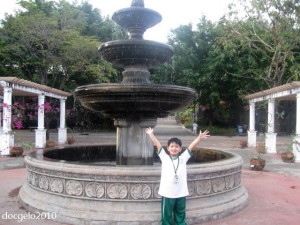 We left Nayong Pilipino at around past 5 in the afternoon to head for our last pit stop : Puregold Duty Free for some shopping.

PS :  Because we as a family have experienced being in few amusement parks abroad, Tina and I wish that local authorities would exert more efforts in putting up and maintaining quality and cleanliness in our very own tourist spots.