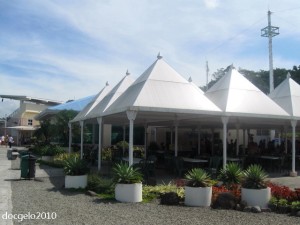 Still under the Subic sun, we queued to claim our lunch. As you know, amusement parks like Ocean Adventure prohibits patrons from bringing food inside; good thing that Gabby’s preschool had availed of the packed lunch inclusive of the tickets for all of us. 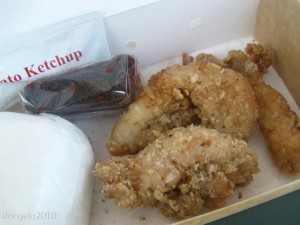 But when we got in the bus, our baon prepared by my wife was so much better! 😀 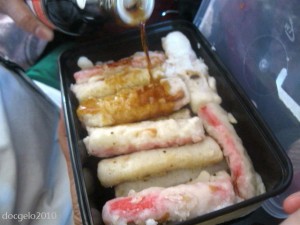 While most of his classmates were holding forks with hotdogs, we’re eating unusual field trip baon. 😀

Home-cooked Kani Tempura was Gabby’s request; we even brought the entire bottle of tempura sauce! And it could have been a complete experience if we didn’t forget the chopsticks!  *grin*

Before we munched those crab sticks, the last feature we enjoyed at Ocean Adventure was their newest show called WALK ON THE WILD SIDE..

Rescued forest animals that serve as environment ambassadors are the main attractions shown in their newest venue ~ Eco-Theater.

My brother who’s a private pilot by profession had experienced Jungle Survival Course in Subic as part of their curriculum before he got licensed.  Now, Ocean Adventure had incorporated bits of that course in their show, Walk on the Wild Side….

Before animals and trainers were seen on stage, a true-blooded Aeta demonstrated the amazing ability to build and light a fire without matches but using only one grass : BAMBOO!  😀

Can you do this ?

The indigenous Aeta named, Bruce (yes, Bruce!) also taught us how to boil rice and cook Sour Broth (Sinigang) using 2 different bamboo poles simultaneously prepared under one fire!  Kuya Bruce also showed how to make utensils out of what else but bamboo.

Then presentation went on with some of the animals that may be encountered in a jungle.  Winged creatures like owl, bats, and eagle were featured with reptile, cat, dog and some mice.

If there’s one important thing that I, Tina, Gabby and the rest of the kids, parents and other guests should always remember from Ocean Adventure trip, it’s the thought “LET’S MAKE EVERYDAY, EARTH DAY!” 😀

We left Subic at around 2PM and headed to Clark, Pampanga…