Foreword : There’s a huge gap between gluttony and food enthusiasm.
It’s best to treat oneself to anything that is never a daily routine.

It was like an amazing race to four awesome buffet stations.
I am still into it until this post.
It was such an experience.

After dining at Circles Events Cafe buffet at Shangri-la Makati last February, this morning we headed to Makati to try the much talked about Family Sunday Brunch Buffet at Dusit Thani Hotel.

Tina & I miss Dusit Hotel. Our wedding reception was held there when it was still Dusit Hotel Nikko five years ago; we had it in its two of three grand ballrooms along with our more or less 200 guests. And so when I introduced Tina to the lunch buffet that the newly renovated Dusit offers every Sunday, she also became excited to go back and see changes that transformed Dusit Hotel Nikko into Dusit Thani now. We hopped blogs to blogs to read feedbacks and comments of diners who already tried it, we viewed photos taken from the four participating high-end restos before we push through with our gastronomic want. 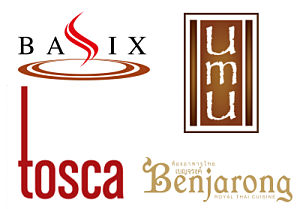 The cost of this digestive feast of epic proprotion is PhP 1450 nett inclusive of access to Umu, a japanese restaurant, Basix a Continental-Asian resto, Benjarong – thai and Tosca – Italian. Children 5 years old and below get to eat for FREE. And kids above 6 years of age get to have 50% discount. What makes it different from other EAT-ALL-YOU-WANT and OPEN-KITCHEN hotel dining is that in Dusit, it’s also DRINK-ALL-YOU-CAN complete with not only teas, juices but also wines!!! How good can it get? Plus, kids once fed and full already can be left SAFELY by enjoying parents at Dusit’s KID’S ZONE where they can watch cartoons, have face painting, coloring activities, play-dough and other arty crafts. The brunch buffet starts at 11:30AM until 3PM, enough for you to go through the four buffet stations either using the grand spiral staircase or the lift going from the lobby to the mezzanine where the other two restos (Benjarong and Tosca) are located. These things are well-thought of by the management, I guess, to cater to the Filipino Family bonding moments.

After paying at the cashier near the entrance to the lobby, the diners get to have these wristbands as passes to the four participating restos.

Directions to the restos are provided to diners by these road signs… clever huh!

Since we google the web first for info about this dining extravaganza, we decided to make UMU, the japanese restaurant as our dining “base” and had a table for three reserved under my name the night before our brunch.

I so like the interiors of UMU. In fact I was speechless when we entered it until we were guided to our table. It’s far different from the usual japanese-oriental restos. There are japanese caligraphies written on black tablets glued on the walls. The upholsteries of seats are in bright colors to blend with UMU’s cozy atmosphere overlooking Dusit’s jap garden.

Here’s a closer look at those really cool jap wooden panels…isn’t it a beauty?

Tina, Gabby and I were seated in a table across this japanese roll station…

First plates of the first couple of this blog :

Those sweet treats came from this station :

Waiters at Umu offered glasses of iced cold green teas for reshrements before I and Gabby walked few steps from our table to Umu’s TEPPANYAKI station.

After choosing few pieces of tiger prawns, salmon, lapu-lapu and mung bean sprouts, i transferred my plate to the chef on the teppan.

Other japanese yummies in Umu :

Then we asked the waiter at Umu to reserve the table for us and promised to come back from other stations after 15 minutes. As we went out of Umu, we found several things happening at the lobby. We made Gabby pose beside a pretty woman dressed in Thai playing good music with her Khim. We also saw 2 staffs geared in carnival attires : a man standing on stilts and a woman doing some balloon arts.

We’re saving some more stomach-space for food from the other stations so we passed on the Pad Thai and curries and Thai soups but there are lots of them than you can imagine. A few more steps and cocktail tables and we saw Tosca, the Italian resto.

At Tosca, the very first buffet spread you’ll see has these sweet desserts…

A closer look at one of those : a cheesecake with dark chocolate…

Tina admired the taste of those little white cups with fruit toppings for what’s inside : FLAN.

What’s in store for the buffet diners at Basix :

After cooking for few minutes, we’re back in our table at Umu to enjoy the food we got from Basix.

Gabby was so excited to play at Kid Zone. So we endorsed him there while we headed for few more food hunting… While at the Mezzanine and enjoying Tosca and/or Benjarong, one can see how the little ones are doing at the Kid Zone where parents like us can leave their children to play, watch cartoons, have some face painting, do some art crafts like do-it-yourself colorful sand art in a bottle and photo frame to bring home as giveaways. What more can you ask for? The kids can be left safely under supervision of trained staff after the parent(s) signed info/instruction sheet. It was so professional of the staff to call me on my mobile 2x after i missed the first to inform me to fetch Gabby by 2:30PM.

We left before 3PM and I must say it was an overwhelming experience to revisit Dusit Thani with such gastronomic pleasure.
Two thumbs up for it!
Sigh.

10 thoughts on “DUSIT THANI’S BRUNCH : A FEAST FOR FAMILIES”